Hello everyone – it’s been a while – my work has kept me flat out and constantly exhausted and getting to write has been a daunting concept following up to 12hr days 7 days a week. But I have found some time and I wanted to write about RICK STEIN AT BANNISTERS, a marvel I have had the privilege of feasting at twice now in the last year. Once I paid for a meal as had wanted to dine here forever and then I scored an invitation from the venue via the Australian Good Food Guide – something I am very grateful for because it allowed me to experience the wonder of Bannisters during daylight. 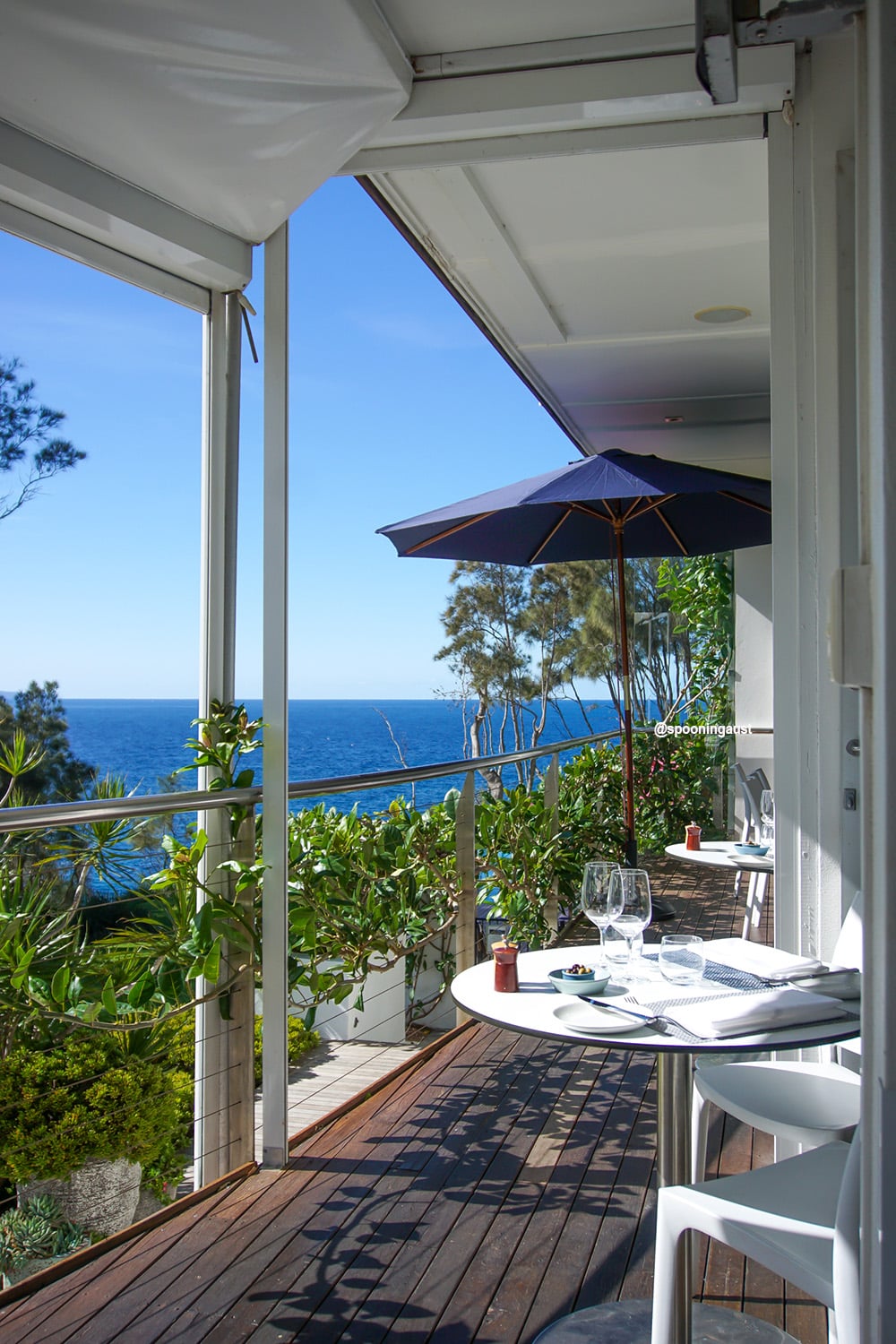 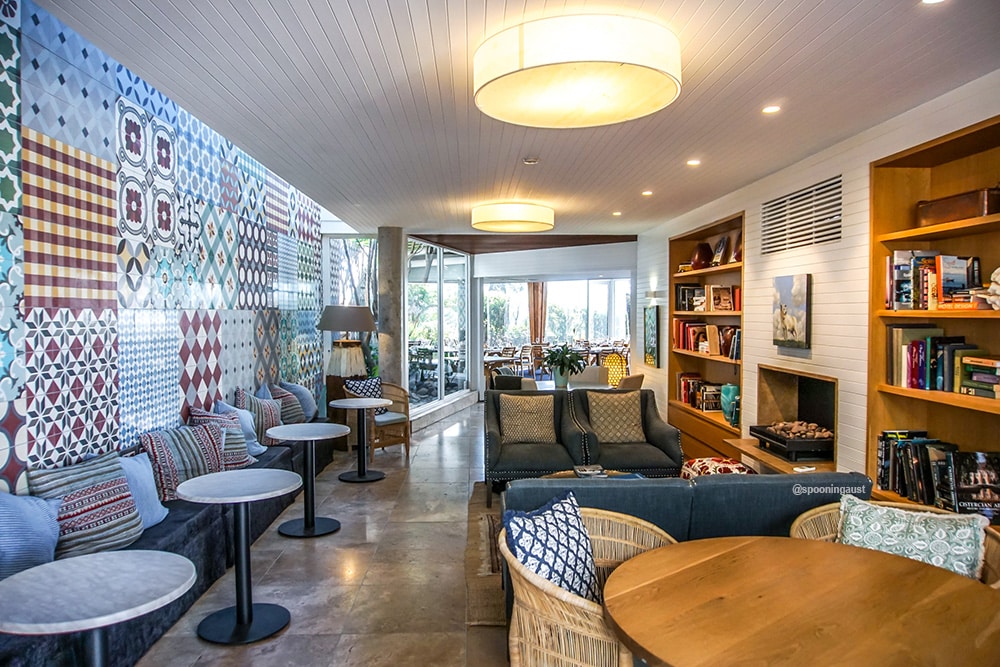 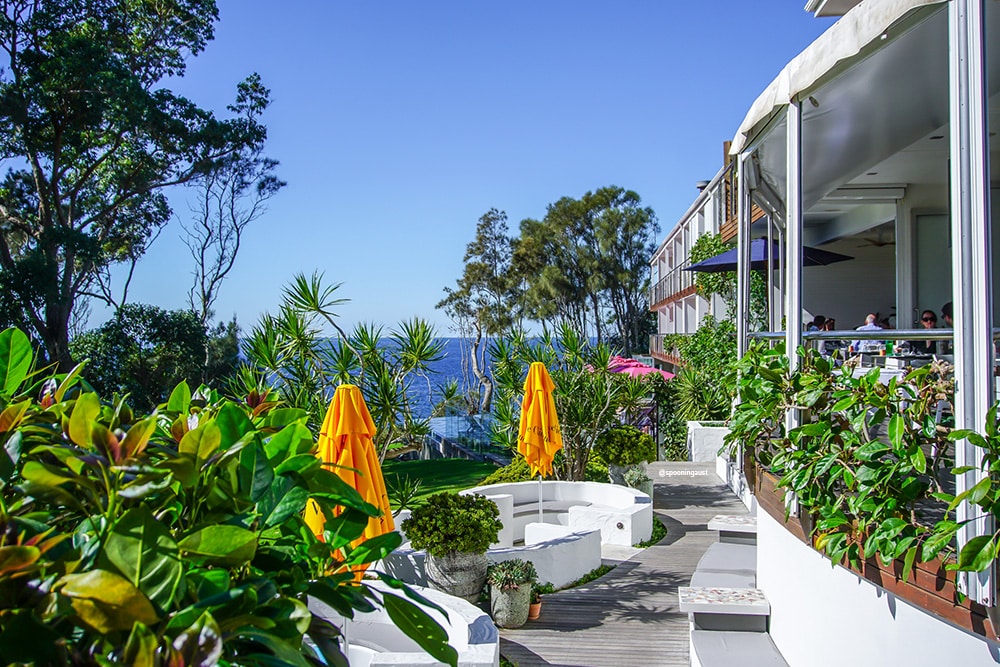 A location to die for…

The Rick Stein name is associated with the venue, because, well, he owns it. But you won’t find him in the kitchen on a regular basis.

He rarely is present in Mollymook although he has a home nearby. I have the fortune of driving through Mollymook whenever I go to stay with my parents, a lot further south, in Bermagui. But each time I drive through I catch up with good friend Kylee who owns Wild Ivy, a knick knacks, clothing and gift shop in Milton, just down the road. We have both enjoyed our two Bannister’s meals together.

Stein and his Australian wife, Sarah, opened Rick Stein at Bannisters in 2009. But he’s usually found in Padstow – the historic Cornish fishing village where his empire began. Or he is travelling the world, film crew in tow, for increasingly more exotic ways to bring you his wonderful food.

I will suggest that if you plan on dining at Rick Stein’s then you book a lunch or an early dinner. The view, the sun and the blue of the Ocean really does add another level of awesome to your experience.

Why is Bannister’s so special?

From what I can gather from eating twice here Bannisters is so successful because it does simple well. Stein uses his knowledge from around the world sampling and deconstructing dishes to bring them to his venues with the freshest and prime (local) ingredients and an elegant and nuanced amount of flavouring. Nothing was overpowering, nothing was heavily created and flavoured, it’s simple done well from recipes crafted from (no doubt) many worldwide small village family recipes.

Oh, and if you can’t do seafood then Bannisters really isn’t for you. It is about 95% seafood, which works well because the stunningly appointed venue overlooks one incredible water view and oceanscape.

The venue itself is part of the Boutique Hotel, Bannisters by the Sea. A wonderful resort styled hotel on the cliffs of Mollymook. The rooms look marvellous and the views are unparalleled in the area. Cocktail bar, infinity pool, pristine bright blue views and a lot of sunshine make this hotel a desired destination of many people travelling the South Coast. Rick Stein’s restaurant is basically the cherry on top when staying here. 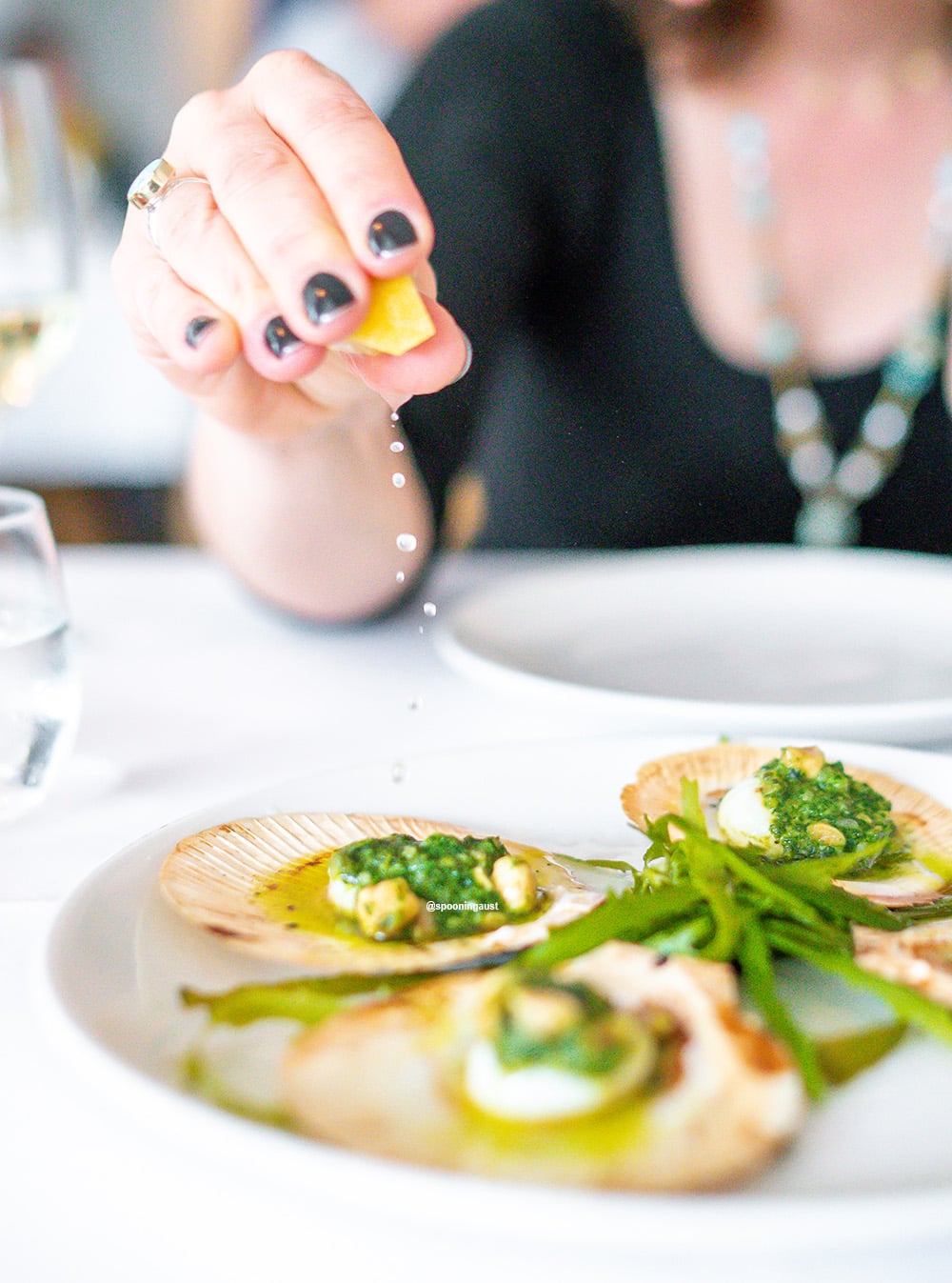 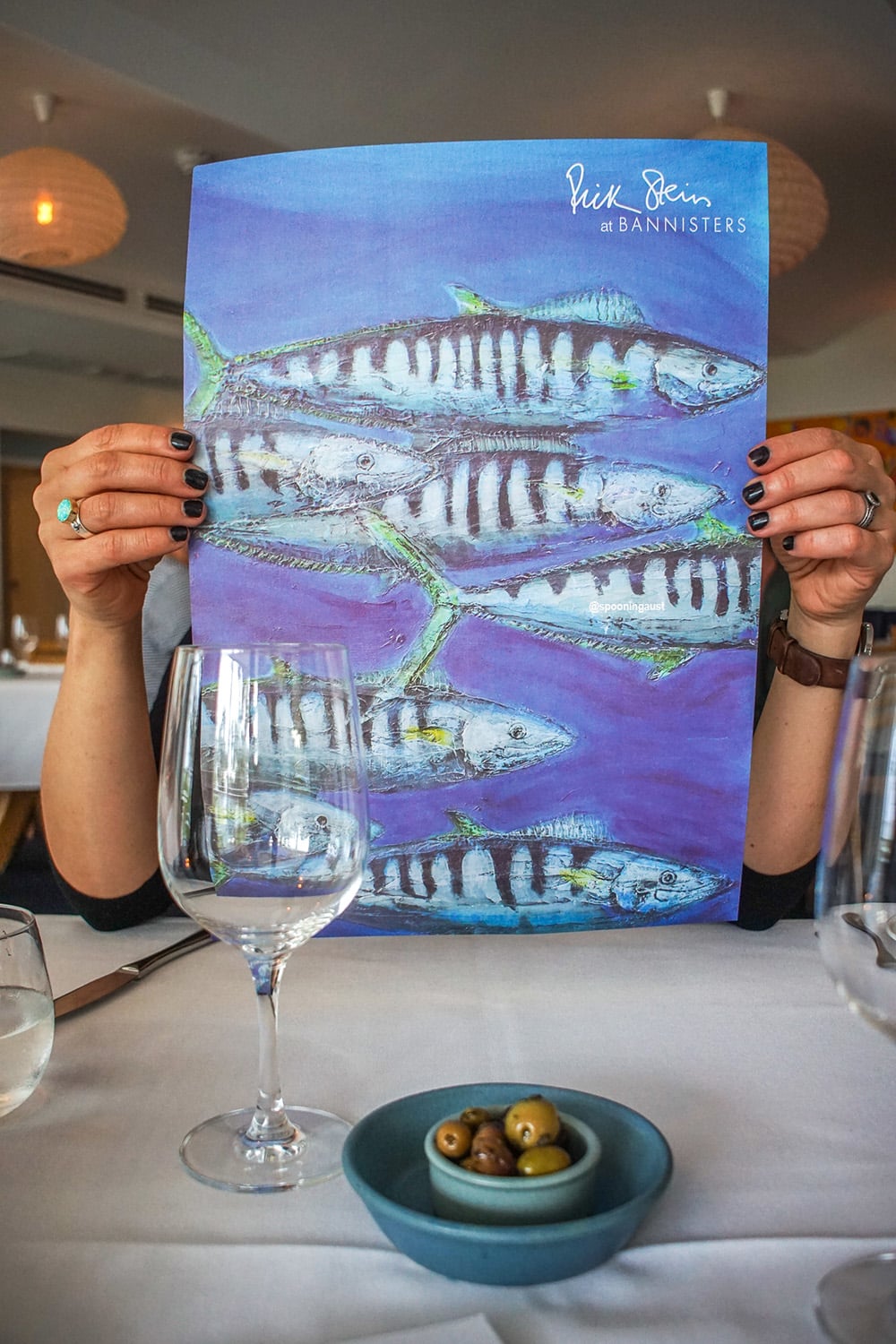 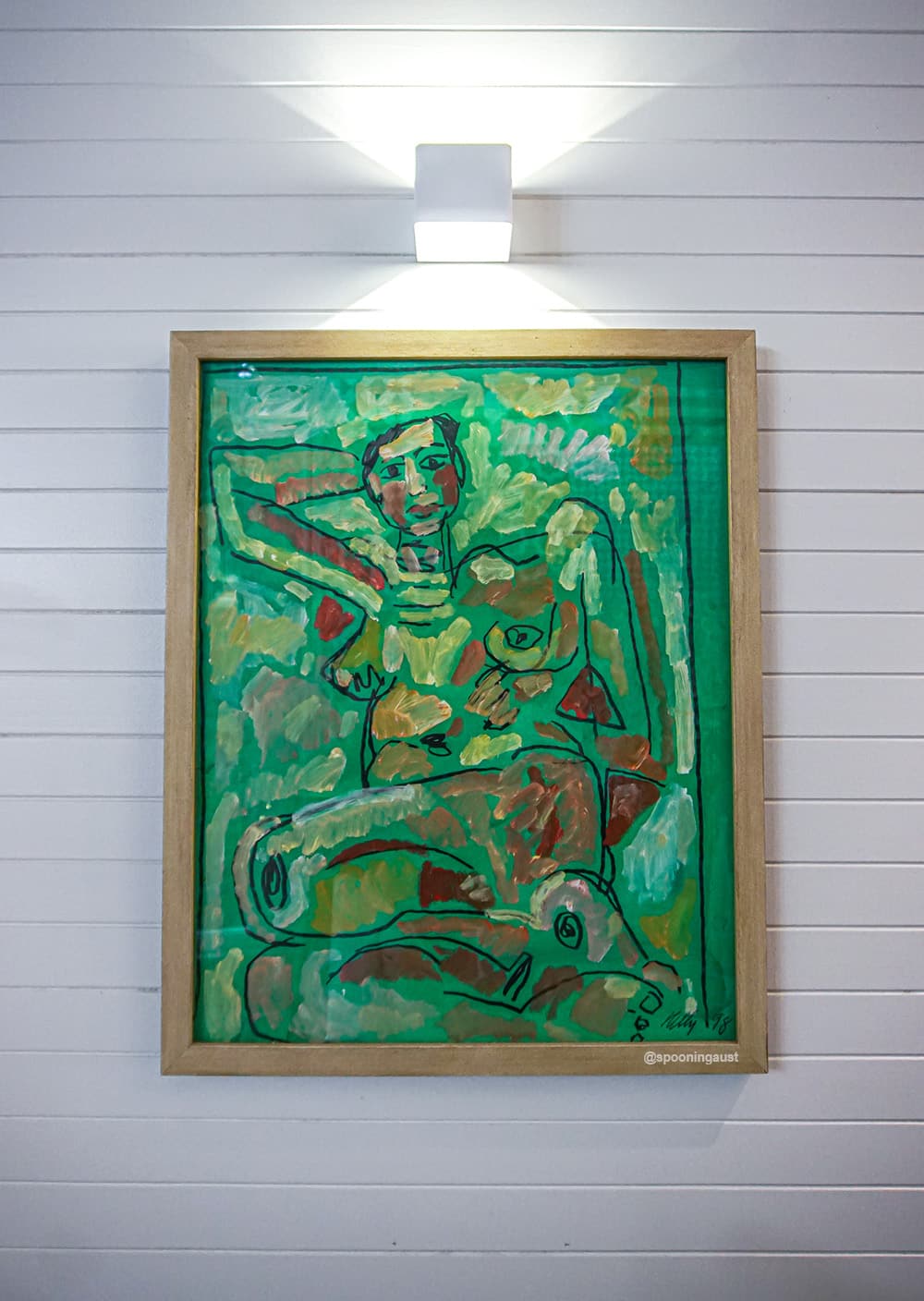 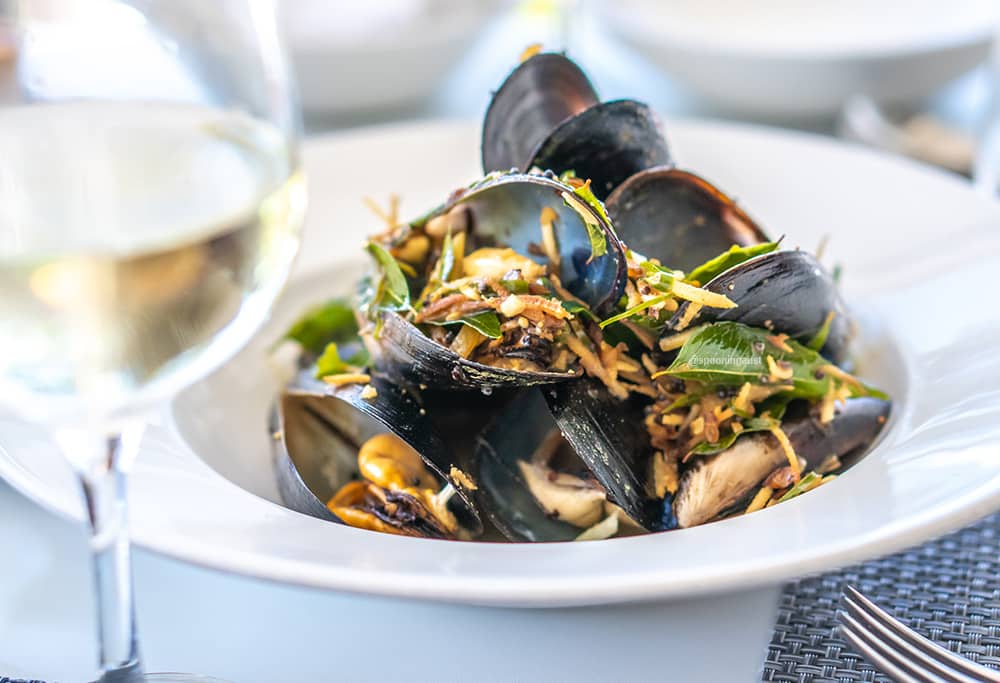 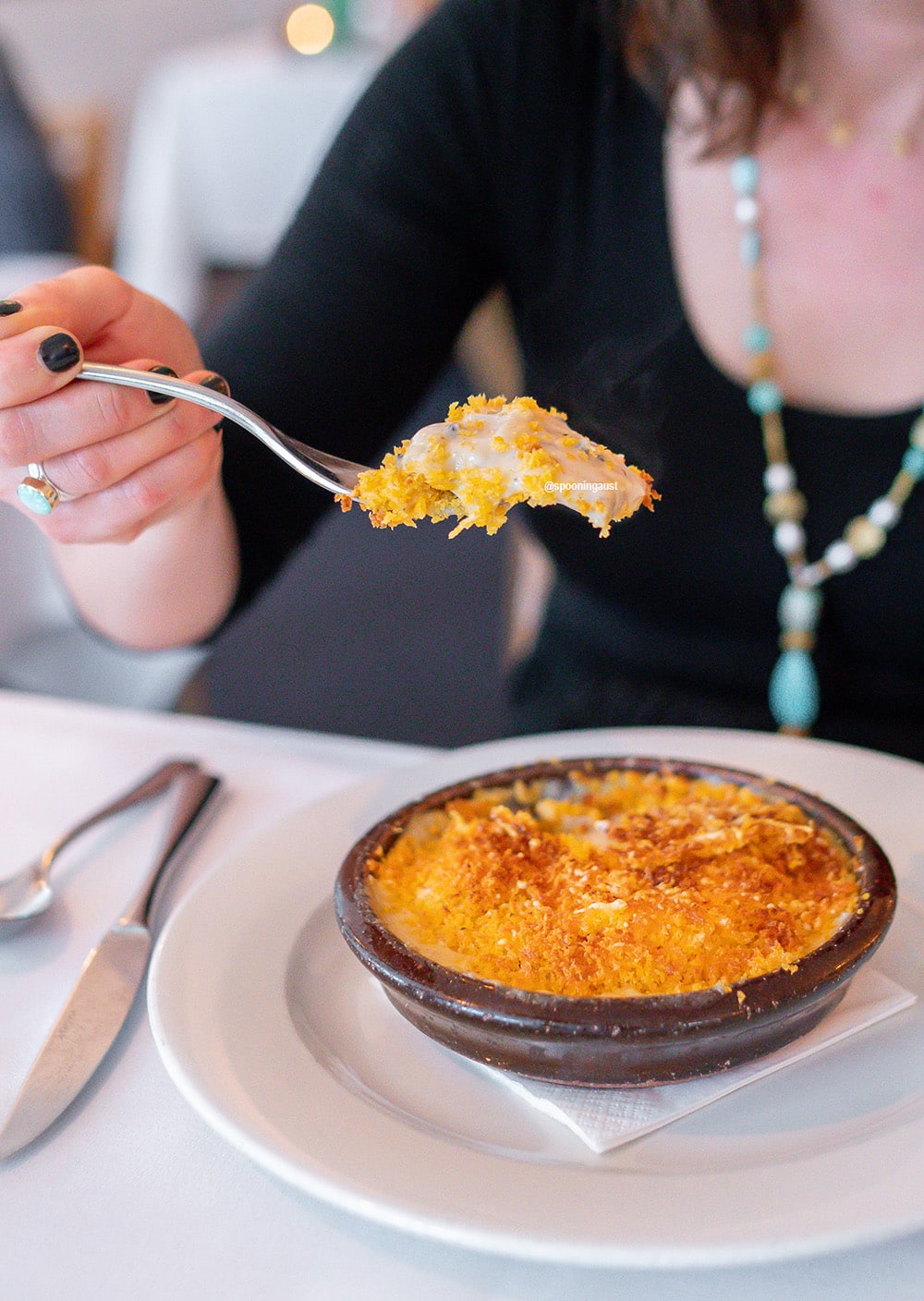 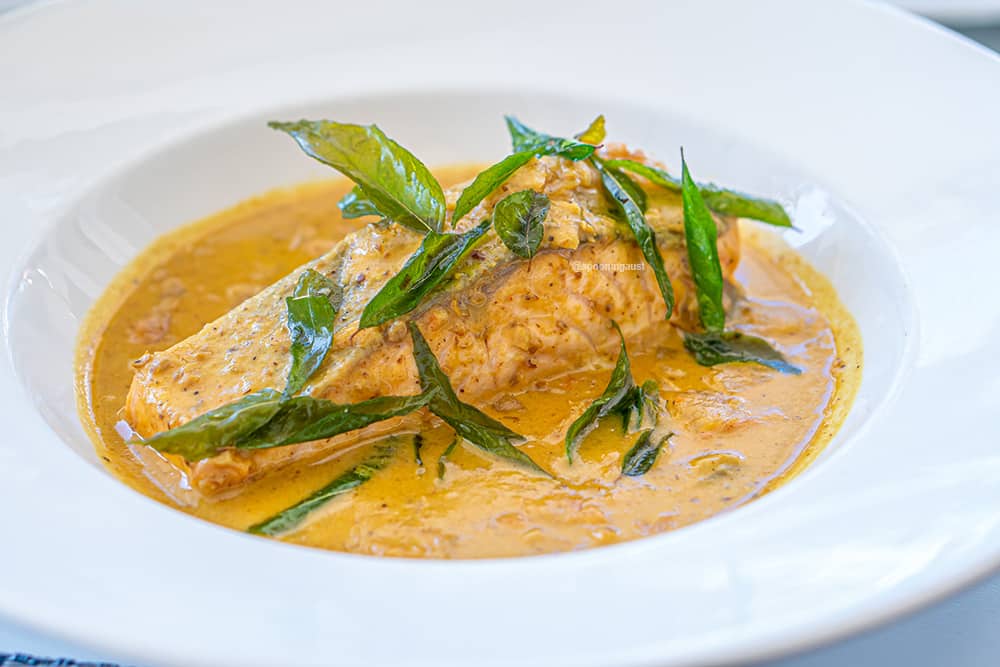 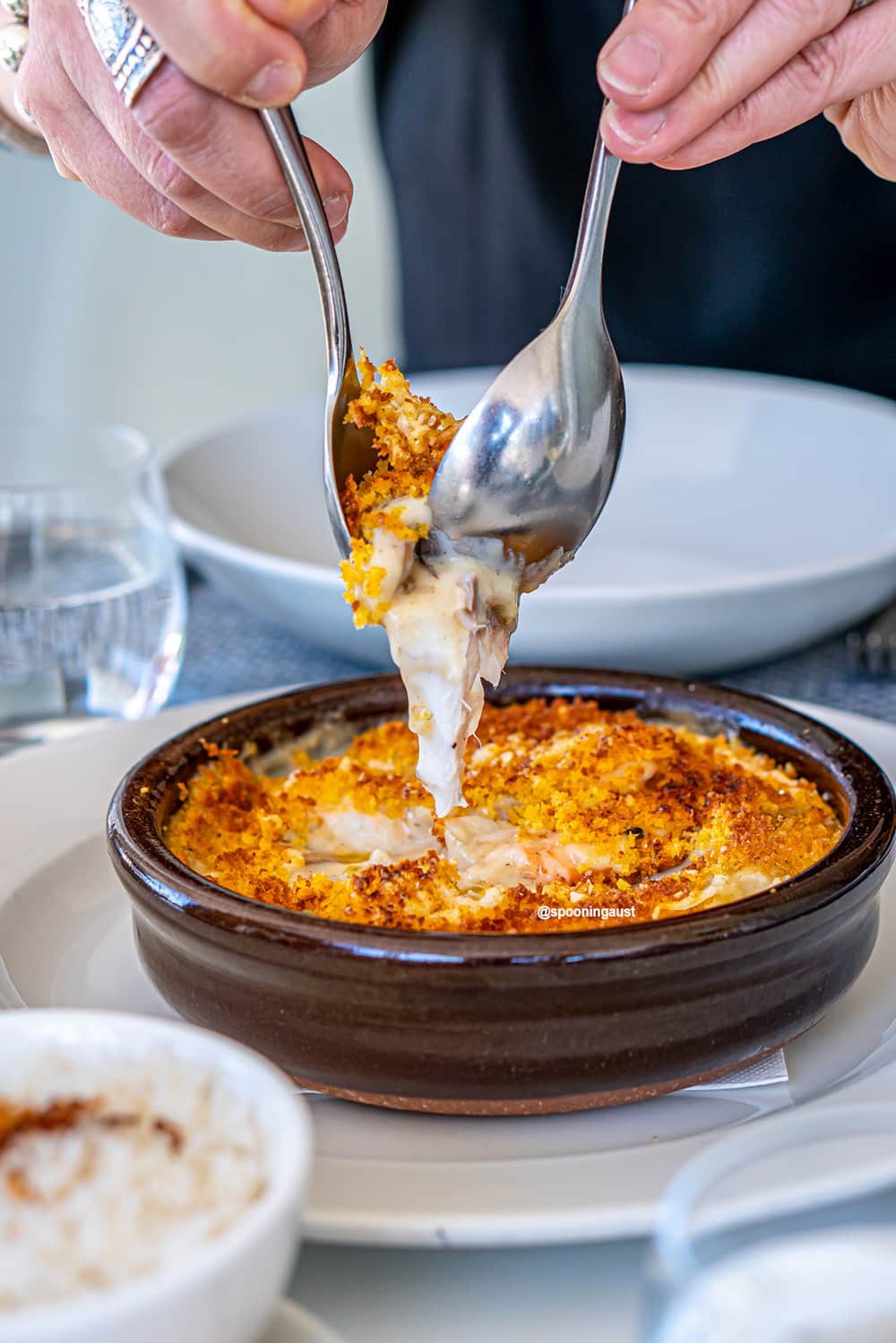 I have had a good selection of the food (and wine) now and I won’t review the wine besides saying it is bloody exceptional. Use the staff’s knowledge and get wine pairings for your dishes by the glass or a good allrounder bottle to get you through.

Food wise all the food is just sublime! The only dish I was not in love with was the Green Mango Trout Salad – I have never been a fan of Thai Papaya Salads and this fits into that category. It’s always a little too sour for me and my tastebuds rebel against it. But Kylee enjoyed it and polished it off.

The Grilled Hervey Bay Scallops in the Shell with Toasted Hazelnut and Coriander Butter are on another level though and need to be devoured. I wanted to order them a second time on our next visit but Kylee won out by saying we try something new and we were mind blown with the Eden Mussels Masala with Coconut, Ginger and Green Chillies. Those flavours with the mussels = BEST MUSSELS EVER!!

I did win out on ordering the fish pie two visits in a row. The Bannisters Fish Pie is what the restaurant is famous for. It might be a Rick Stein restaurant but people come here for the pie, not for Rick. Salmon, blue eye trevalla, snapper, scallops, mushrooms and prawns in a creamy fish velouté sauce with black truffle. Gratinated with breadcrumbs and parmesan. It made me foodgasm on both occasions and is a dish I could happily live off for the rest of my life.

For our other two mains from each visit we did the Steamed Whole Snapper stir fried with Ginger and Soy Sauce, Sesame Oil, Crispy Garlic and Shallots on the first visit and the unique Sri Lankan Huon Salmon Curry, Mango Chutney, Naan Bread & Pilau Rice on the second. Both dishes could win awards. I am not a fan of a whole fish but this was superb. That sauce was exceptional with a somewhat Thai umami influence. It was so fresh it was like the fish had been caught off the cliff and cooked immediately.

The Salmon Curry won out though as my second favourite Stein recipe from Bannisters. A salmon steak in the curry sauce was unique and it worked well. It looked amazing and the curry flavours were sweet and so delicious Kylee and I basically licked the plate dry. I will order this again on my next visit – as my second main after fish pie haha.

I am really surprised Rick hasn’t found seafood desserts on his travels yet but the desserts we had were a treat. On our first visit we were both so full and settled on sticky wines for dessert (highly recommend) although on the second visit we were down for desserts. The pimped out lemon tart was more like a work of art with some wonderful sweet fruit flavours than a standard lemon tart. Lemon tarts are a favourite of mine and I just worship those wonderful sweet citrus flavours.

But my other favourite is an affogato and the Bannisters affogato was as much a winner as Kylee’s amazing (but mostly missed) pour shot haha. It was wonderful and I will have it again. 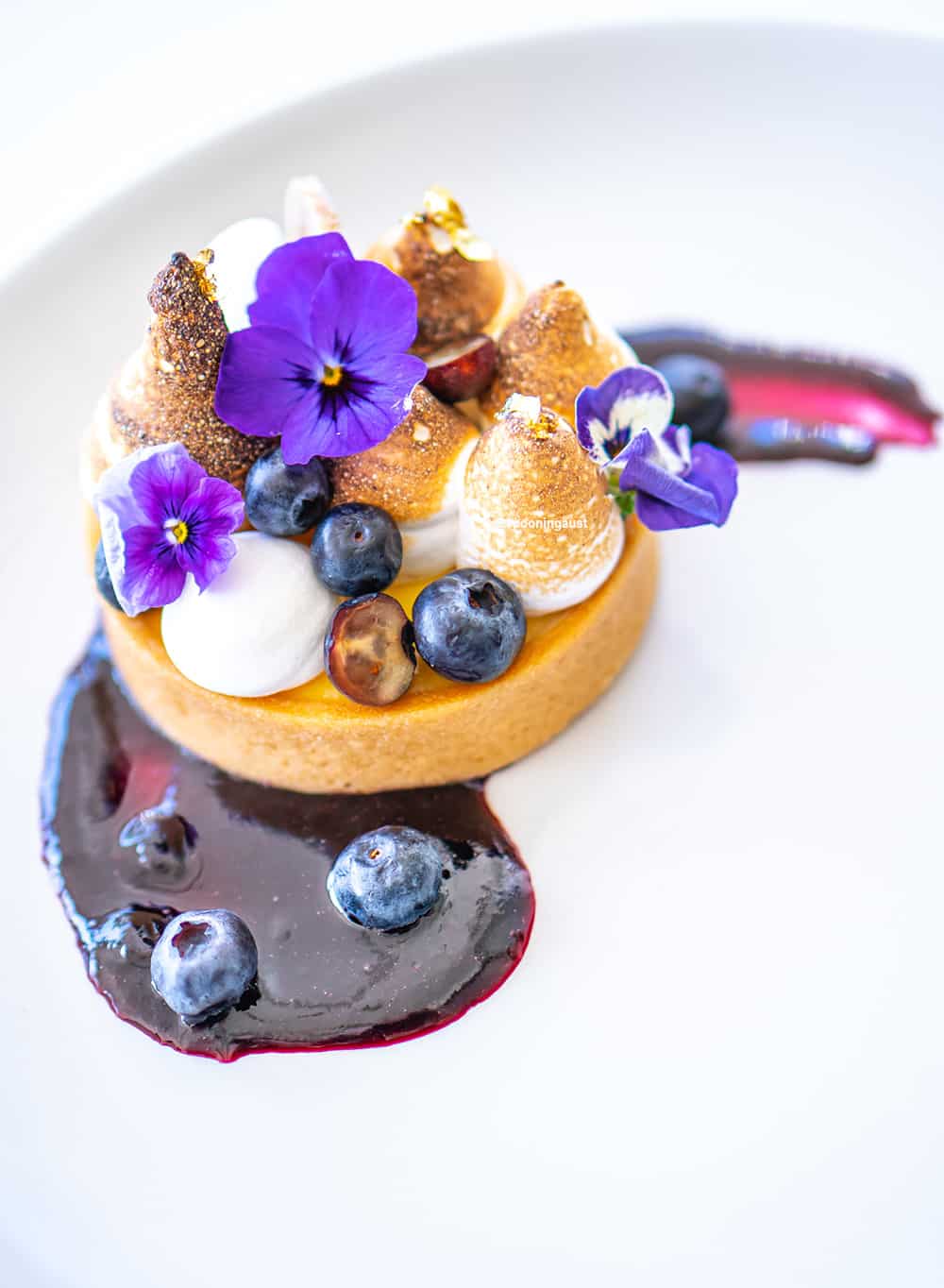 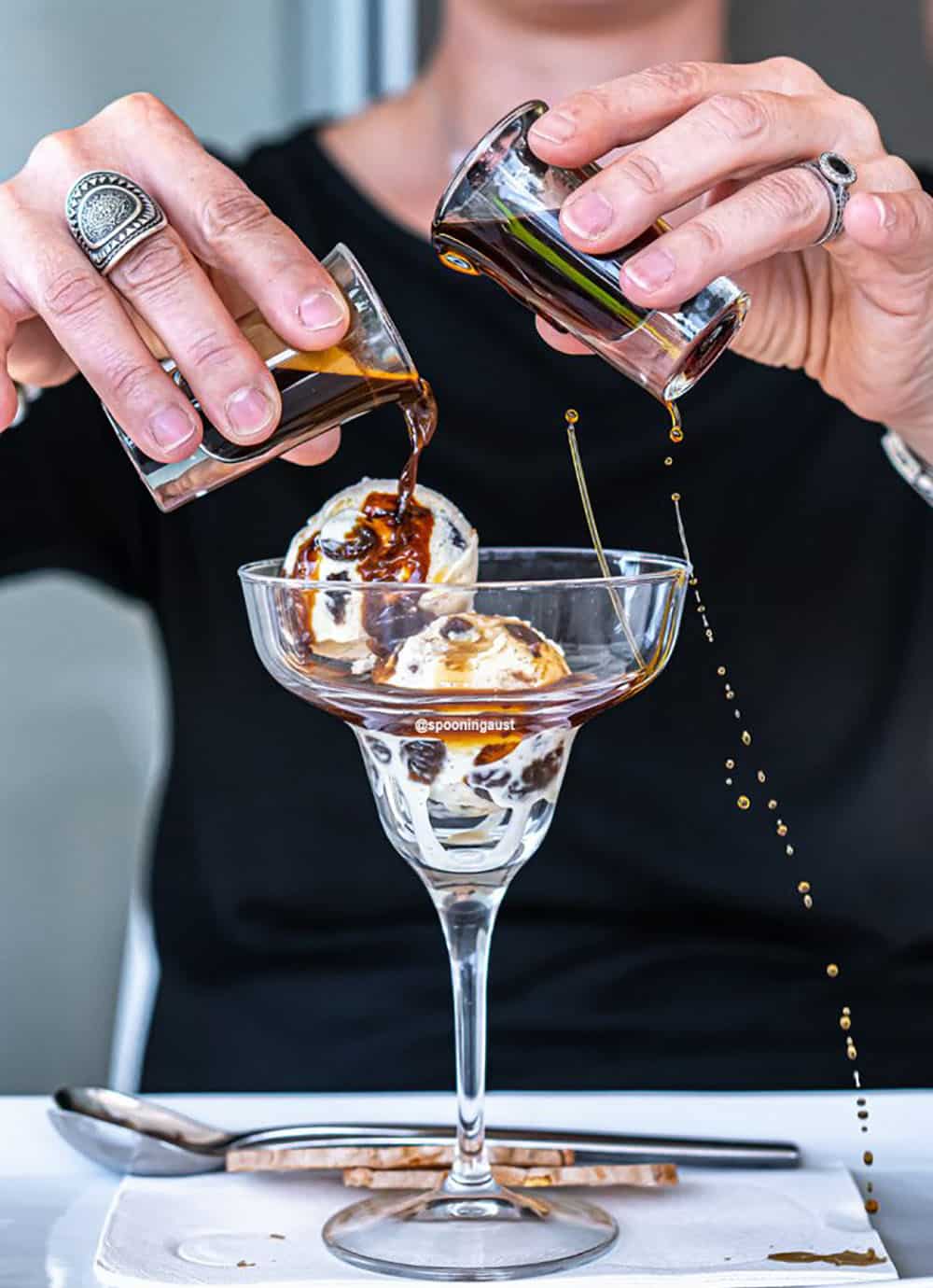 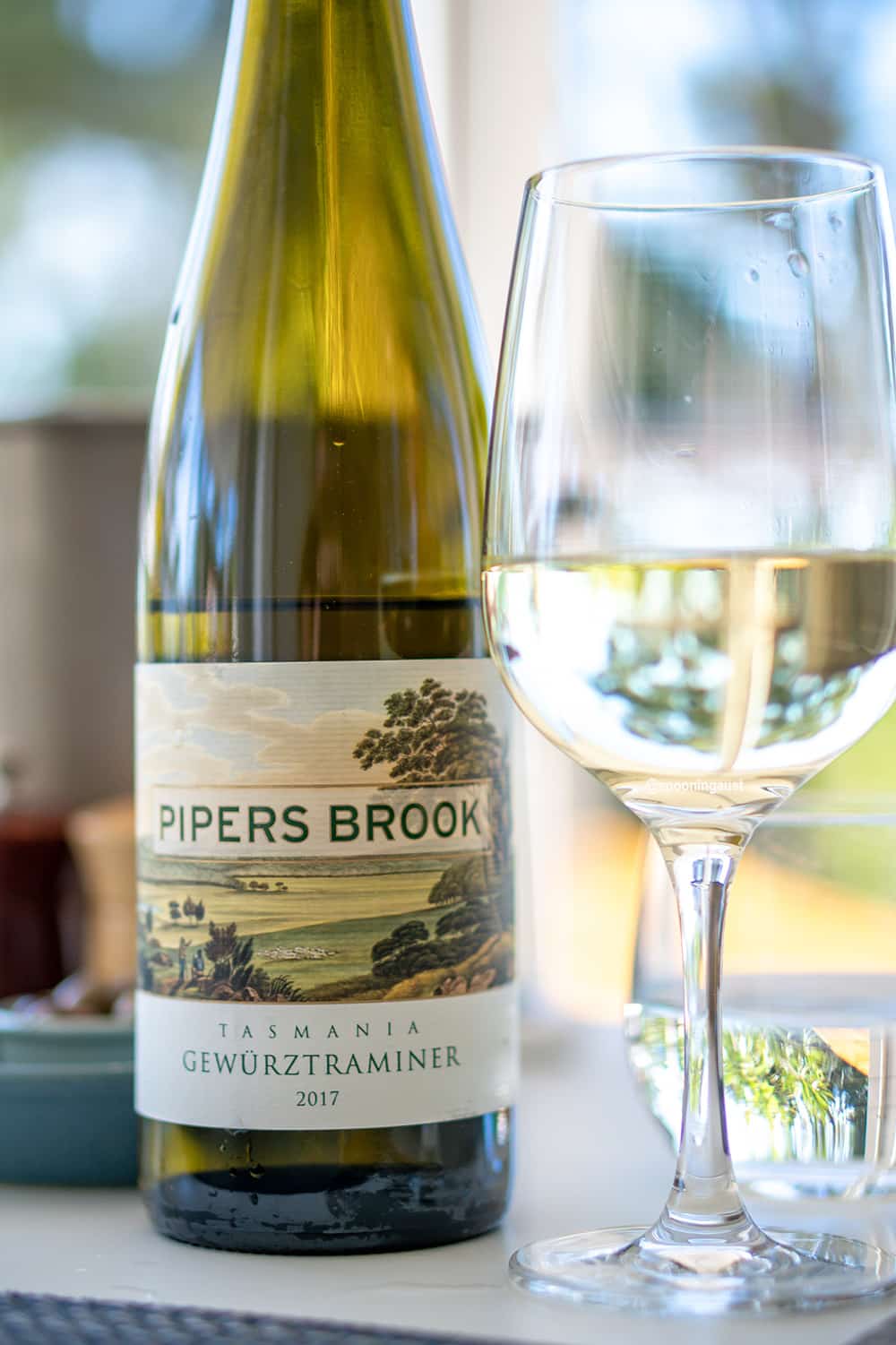 RICK STEIN AT BANNISTERS won’t be a cheap meal but it won’t cost you a body part. Our first meal cost us about $120 a head and that included a couple of drinks each. But my god it was worth it. Seafood and views to rival the best in the country. Do not visit unless you have the fish pie and that Salmon Curry is as good. A must for people on a South Coast journey who appreciate the finer foods in life.

*** Spooning Australia Paid for their Meal ***

Opening Hours
Open for dinner daily and lunch on Friday, Saturday and Sunday.